an elderman,
ALDERMAN, senator, chief, duke, a nobleman of the highest rank, and holding an office inferior only to that of the king; mājor nātu, sĕnātor, prŏcer, princeps, prīmas, dux, præfectus, trĭbūnus, quīcunque est aliis grădu aut nātu mājor. The title of Ealdorman or Aldorman denoted civil as well as military pre-eminence. The word ealdor or aldor in Anglo-Saxon denotes princely dignity: in Beowulf it is used as a synonym for cyning, þeóden, and other words applied to royal personages. Like many other titles of rank in the various Teutonic languages, it, strictly speaking, implies age, though practically this idea does not survive in it any more than it does in the word Senior, the original of the feudal term Seigneur. Every shire had its ealdorman, who was the principal judicial officer of the shire, and also the leader of its armed force. The internal regulations of the shire, as well as its political relation to the whole kingdom, were under his immediate guidance and supervision,—the scír-geréfa, or sheriff, being little more than his deputy, and under his control. The dignity of the ealdorman was supported by lands within his district, which appear to have passed with the office,—hence the phrases, ðæs ealdormonnes lond, mearc, gemǽro, etc. which so often occur. The ealdorman had also a share of the fines and other monies levied to the king's use; though, as he was invariably appointed from among the higher nobles, he must always have possessed lands of his own to the extent of forty hides, v. Hist. Eliens. ii. 40. The ealdormen of the several shires seem to have been appointed by the king, with the assent of the higher nobles, if not of the whole witena gemót, and to have been taken from the most trustworthy, powerful, and wealthy of the nobles of the shire. The office and dignity of ealdorman was held for life,—though sometimes forfeited for treason and other grave offences; but it was not strictly hereditary
Show examples
the new constitution introduced by Cnut, who reigned in England from A.D. 1014 to 1035, reduced the ealdorman to a subordinate position,—one
eorl, Nrs. jarl, being placed over several shires. The Danish kings ruled by their eorlas or jarls, and the ealdormen disappeared from the shires. Gradually the title ceased altogether, except in the cities, where it denoted an inferior judicature, much as it now does among ourselves
Show examples
Similar entries
v. eorl, scírgeréfa, and húscarl.
Linked entries
v.  aldor-mon ealdermen ealdor-mon ealdur-man eldor-man.
Entry information
Citation 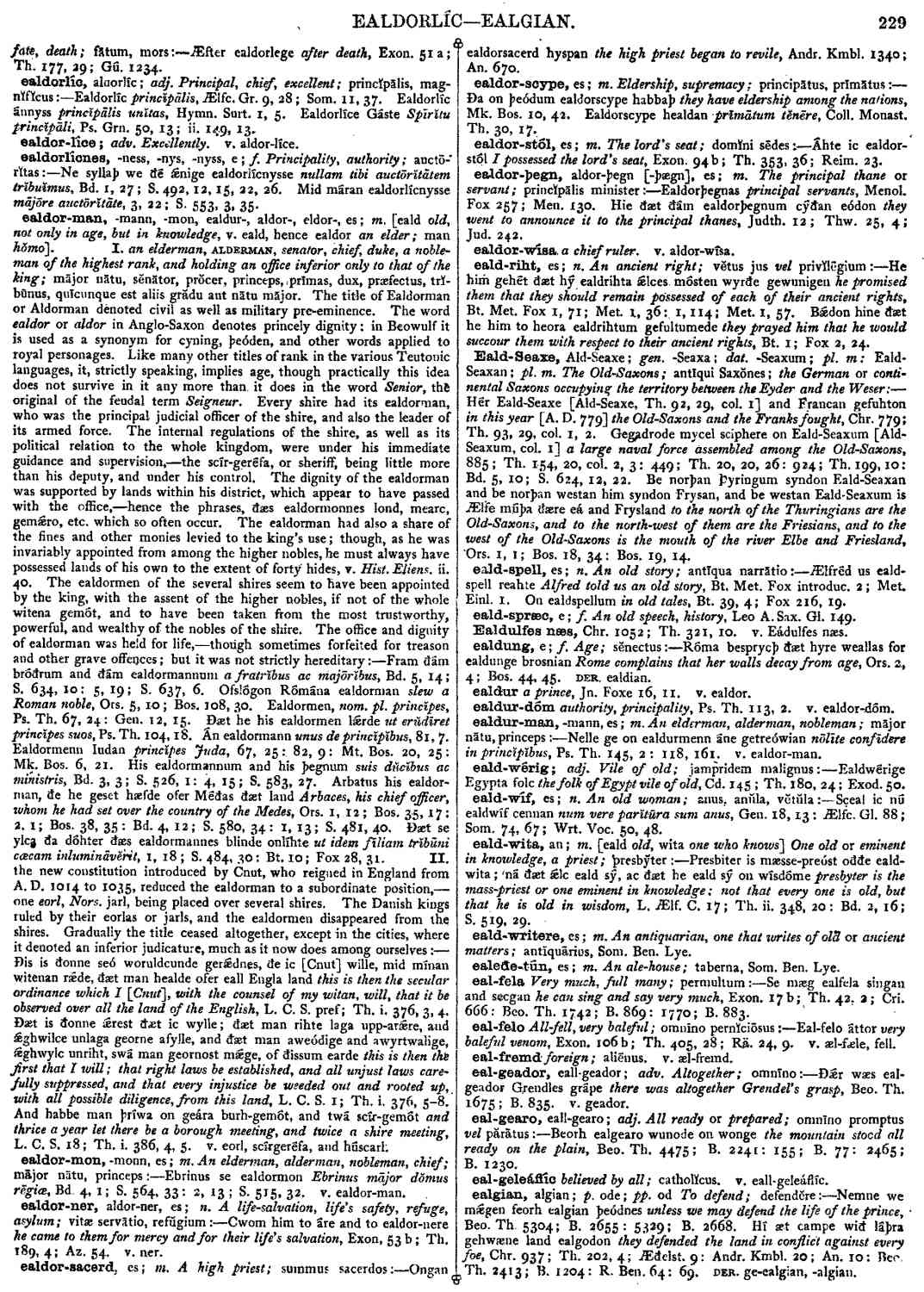