the, vide Þ, þ.
The indigenous Pagan alphabet of our Anglo-Saxon forefathers, called Runes, it must be particularly observed, not only represents our letters, but the names of the letters are significant. The Runes are chiefly formed by straight lines to be easily carved on wood or stone. For instance, the Rune ᚪ ác is not only found in inscriptions on wood and stone, but in Anglo-Saxon
MSS. and printed books. In manuscripts and in books, it sometimes denotes the letter a; and, at other times, the oak, from its Anglo-Saxon name, ác the oak. v. ÁC, and RÚN. B. The short or unaccented Anglo-Saxon a is contained in the following words, which are represented by modern English terms of the same import, having the sound of a in man; as Can, man, span, hand, land, sand, camp, dranc, etc.
The short a is often found in the final syllables of inflections, -a, -an, -as, -aþ, etc. It generally appears in the radix before a doubled consonant, as swamm a fungus, wann wan; or two different consonants, as mp, mb, nt, nc, ng, etc.—Camp, lamb, plante, dranc, lang, etc.
The radical short a can only stand before a single consonant and st, sc, when this single consonant and these double letters are again followed, in the inflections or formative syllables, by a, o, u in nouns; and by a, o, u, e in adjectives; and a, o, u, and ia in verbs; as Dagas, daga from dæg, hwalas from hwæl, fatu from fæt, gastas from gæst, ascas from æsc; adj.

The remarks in
are of great importance in declining words, for monosyllables, ending in a single consonant, in st or sc, change the æ into a, whenever the consonant or consonants are followed by a, o, u in nouns, and a, o, u, e in adjectives, vide Æ.
It must be remembered then, that a short a cannot stand in a word
when it ends in a single consonant, that is, when no inflections of
a, o, u in nouns follow; as in Stæf, fræt:
when in nouns a single consonant is followed by
e; as Stæfes, stæfe, wæter:
when the word has any other double consonants besides st, sc, though followed by a, o, u; as Cræft, cræfta, ægru n. pl.
of æg:
in contracted words, when æ is not in the last syllable; as Æcer, pl. æceras, æcerum, contracted æcras, æcrum; wæpen, pl. wæpenu ; mægen, pl. mægenu, contracted wæpnu, and mægnu.
Though I have given in C. 3. the reasons, which Grimm assigns for making the prefixed a-, long, I believe it is generally short in
A. Sax. as in Eng. a-bide = A. Sax. a-bídan = bídan, so a-cende = cende
Show examples
a- prefixed, sometimes denotes
Negation, deterioration, or opposition, as From, out, away; thus awendan to turn from, subvert, from wendan to turn; amód out of or without mind, mad; adón to do away, banish, composed of a from, dón to do, vide Æ. The prefixed a- does not always appear to alter the signification : in this case it is generally omitted in modern English words derived immediately from Saxon,—thus, Aberan to bear; abrecan to break; abítan to bite. The prefixed a-, in such cases, seems to add some little force or intensity to the original signification of the word to which it is joined,—thus, fǽran to make afraid; terrere: a-fǽran to terrify, dismay, astound; exterrere, perterrere, consternare, stupefacere. C. The long Anglo-Saxon á is accented, and words containing this long or accented á are now represented by English terms, with the vowel sounded like o in no and bone. The following words have either the same or an analogous meaning, both in English and Anglo-Saxon: Hám home, án one, bán bone, hán hone, stán stone, sár sore, ráp rope, lár lore, gást ghost, wrát wrote. Sometimes the accented or long á is represented in English by oa; as Ác an oak, gád a goad, lád load, rád road, brád broad, fám foam, lám loam, sápe soap, ár oar, bár boar, hár hoar, bát boat, gát goat, áta oat, áþ oath, láþ loath. Occasionally á becomes oe in English; as Dá a doe, fá a foe, tá toe, wá woe; but the oe, in these words, has the sound of o in no. The same may be said of oa in oak, goad. Hence it appears that the Anglo-Saxon á is represented by the modern English o, oa, and oe, which have the sound of o in no and bone; as Rád rode (p. of ride), rád a road, and dá, a doe. Deut. Gram, von Jacob Grimm, vol. i. pp. 358,

The long á is often changed into ǽ as Lár lore, lǽran to teach, án one, ǽnig any.
The following is a precise summary from Grimm of the prefixed á-, long or accented. The prefixed á- is long because it is a contraction and represents the preposition æf of, off, from, away, out of, or the preposition on on, in, upon, into, or as the
Lat. in and Eng. un; as á-dúne for æf-dúne, á-wendian for æf-wendian, á-drædan for on-drædan, á-gean for on-gean, á-týnan to unshut, open,

to the Latin ex out, as á-gangan
to go out; exire:
to the English up, as á-hleápan to leap up; exsilire: á-fyllan
to fill up; implere:
it expresses the idea of an origin , becoming, growing, á-blacian to blacken, to become black; á-heardian
to grow hard:
it corresponds to the Latin re, as á-geban reddere, á-lósian redimere, á-sécan
requirere:
it is often used merely to render a verb transitive, or to impart a greater force to the transitive meaning of the simple verb,—á-beódan offerre, a-ceapian emere, á-lecgan ponere, á-sleán
occidere:
it is used with intransitive verbs, where it has hardly any meaning, unless it suggests the commencement or beginning of the action, as á-hleahan ridere, á-sweltan
mori:
it expresses the end, aim, or purpose of an action, as á-dómian condemnare, á-biddan deprecari, á-wirþan perire.
But, after all, it must be borne in mind, that the various shades of its meaning are innumerable, and that, even in one and the same compound, it often assumes different meanings. For further illustration we must therefore refer to the compounds in which it occurs, Grm. ii. 818-832. I have, in justice to Grimm, given his motives for marking the prefixed á- long: I believe, however, it is short. See B. 6.
Entry information
Citation 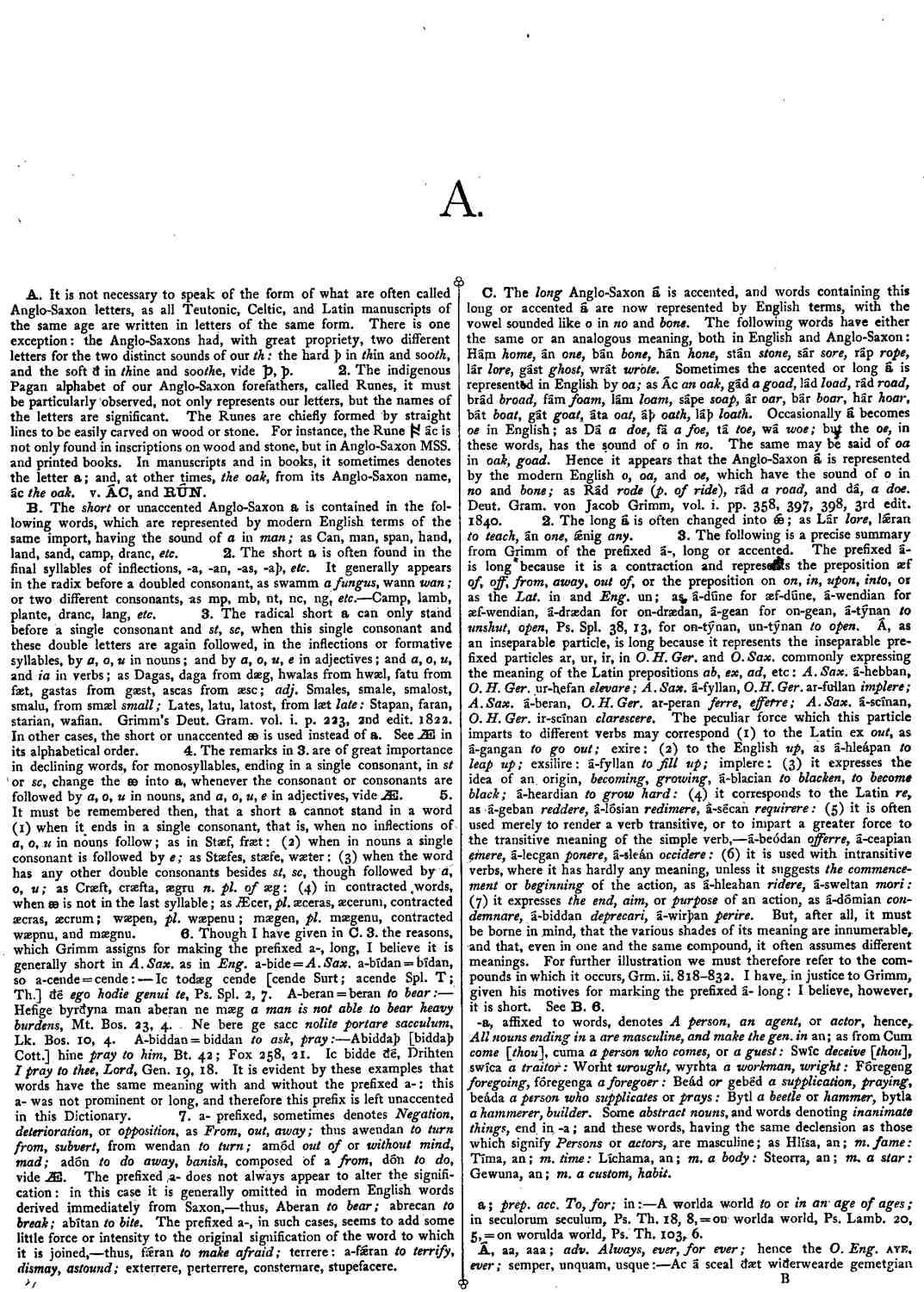